Let's see how the current digital economy could be translated & reimplemented on top of Headjack.

Freedom can be a competitive advantage: Substack lets you leave & take your subscribers with you (an email list) - a conscious choice to compete on the quality of service. But they are an outlier.

Headjack's fundamental premise is that it unlocks many possibilities & value to users because the barrier to entry for services would be much lower and they could be composable & interoperable which would lead to greater innovation, quality, choice & freedom. So given that users would benefit more in this ecosystem and that their attention is finite & will be spent either way - it stands to reason that there is money to be made in an even bigger pie! But competition will look different.

"The whole is greater than the sum of its parts." - Aristotle

Unbundling the media stack with markets

"There’s only two ways I know of to make money– bundling, and unbundling." - Jim Barksdale

The rule book will be different - instead of vertically integrated services with tons of employees that reinvent the wheel, companies would specialize and compete on different layers of the stack. Markets Are Eating The World - there will be one for each of these: 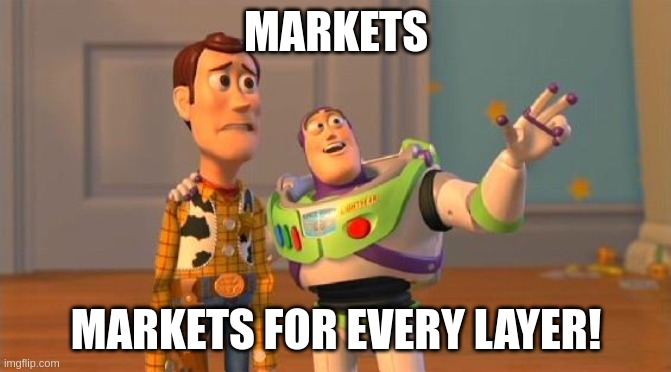 Creating a new social application would require just a bit of frontend code by a few developers with all the heavy lifting of infrastructure, data storage & processing, content moderation, ad serving & recommendation engines being provided by pay-as-you-go services through APIs. The (data) network effects will be shared by every actor in the ecosystem. Launching a proof of concept would be trivial and new business models & use cases (no ads for social) would be enabled. 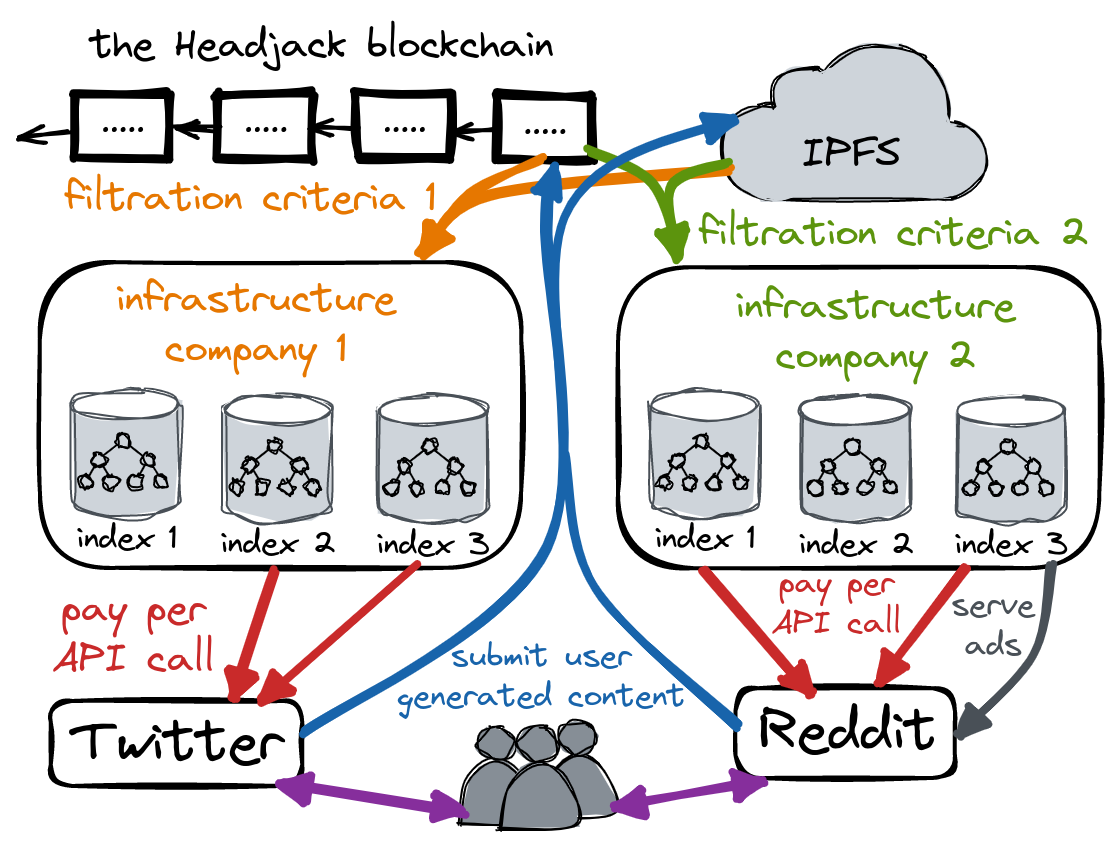 It will take some time for markets to mature and the dust to settle once specialization & competition are democratized, but then prices will be low and the efficiency & quality of services high.

"Ads are the cave art of the twentieth century." - Marshall McLuhan

The goal is democratized access, competition & innovation - not the end of the Ad model which is a pipe dream - it isn't going anywhere. The current problem is that we don't have alternatives and that there's no transparency.

"For as long as humans have crafted disembodied versions of their voices, whether it be Pompeiian graffiti or the latest tweet, there have been attempts to both guide user attention in some remunerative direction, and measure the effectiveness of that attention-gathering." - source

"The attention economy has always had its ledger and its cash register, and Web 3 will be no different." - source

"Attribution is the accounting layer of the entire user-acquisition stack: social media, organic community building, referral programs or (gasp!) even ads, they’re all just inputs to attribution. It's much more than just bean-counting, though the bean-counting is important. It’s the capital ‘T’ Truth that the entire ecosystem depends on." - source

"Internet monetization is somewhat like a Soviet election: It doesn’t matter who clicks and where, it’s who counts those clicks that matters. The technology and business of that counting of clicks (and everything else you do online besides) goes by the dull-sounding name of attribution, and it determines the fate of trillion-dollar companies." - source

"A recent example of questionable attribution: I tweeted about my e-mountain bike, Jason Calacanis (of all people) saw it and asked about the model. Someone posted a review from bikeradar.com, and Jason (I don’t know if this is true) probably googled for it and maybe bought it. Who deserves the attributions credit? According to Google (surprise, surprise), it’ll be Google … and they’ll take all the credit, which is why Google is worth so much and Twitter so little." - source

This entire flow could be tracked

Furthermore, attribution services could credit accounts that retweet content and add more interactions with it with some of the profits

de-duplication through content addressing & adding traceability of content helps paint the picture what happened when and by who - aiding attribution. Infrastructure companies on which applications get deployed on can handle such tracking within them but since all the data is openly broadcasted competing services could offer alternative business models.

"Whether it be circulation numbers for 19th-century newspapers (the start of the printed ads business), or Nielsen ratings for pre-cable TV that determined ads rates there, there’s never been a media ecosystem that didn’t have attribution." - source

"If you had to conjure some collective mechanism for storing aggregated data that was selectively shareable between publisher and advertiser, it would look much like a blockchain." - source

^^ this can be done through verifiable computation & sharing indexes between publishers & advertisers within index infrastructure.

This article posits that attribution has to go on-chain but Headjack offers an alternative - through the infrastructure companies.

It is inevitable that mass media & aggregation will be handled by centralized services that can save user details in logs - what we could do is make a market for user data and make it easier to opt out of such data harvesting with alternatives & a way for whistleblowers to prove if a contract hasn't been honoured.

the history of actions and tracked events would be private and shared only between infra platforms and ppl paying for ads?

what if people jump between apps but aren't logged in some of them? chain is broken.

"Advertising will not go away—it never does—but who profits from it will change radically." - source

google currently gets the lions share of the ad revenue

"For every 1,000 ad views, advertisers pay a certain rate to YouTube. YouTube then takes 45% and the creator gets the rest." - source

"Your take rate is my opportunity" - @cdixon

"You know something is profoundly wrong with our economy when Big Tech has a higher take rate than the mafia." - U.S. Congressman Ritchie Torres

One reason Headjack would win is because there will be no wallet fragmentation - users will mostly have 1 account.

All content is published through applications and the creator's choice for which one to use is forever embedded in the content URIs. This can serve as advertising for applications because even when a URI is viewed through competing ones, the original source should be displayed and there ought to be a way to view it through the original one - especially if the message type is not supported.

This can be a powerful way for new applications to get discovered - they can even pay creators to use them in order to attract new users and have their names in the URIs of content forever.

IDMs will be the central hub to store all user preferences, social graph, DMs, progress on long-form media, personal notes & bookmarks, etc. But also pictures, videos and many other types of data - the one-stop shop for all things identity. There'll be plenty of ways to provide free tiers and yet monetize for more heavy & advanced use. Anyone will be able to host their own IDM.

IDMs could also provide a feed & a home page similar to current social networks with the most "relevant" content for users and even serve ads, but there'll be a lot more configuration options & choice because all IDMs will be in competition with each other & users will be able to migrate.

creators will need to shift how they monetize because there won't be platform lock-in & attribution :/ or actually the application attribution for content naturally leads to users checking it out - creators can and should be paid to generate content through them and based on virality of content they could get paid out? omg.

Let's take YouTube for example: currently it is & does many things at once: storage & streaming of video, a recommendation system, serving ads, social features, subscriptions, etc.

The future of influencer marketing

Currently, companies cannot target you directly with ads without the social media platforms as middlemen - but with open data, any company could analyze the world and decide what their target audience is. Currently, Coca-Cola targets audiences with the same ad but with some precision - imagine if they could directly target individuals with tailor-made ads based on them - what if an algorithm picks up that you're gay and coca cola send you an ad with a shirtless male (if you're male) - point taken from Yuval Noah Harari here: https://youtu.be/j0uw7Xc0fLk?t=260

Influencer marketing is the end game

The first mover advantage & the transition